Isn’t it amazing how one thing can lead to another, and pretty soon your whole life could be different? Well that is exactly what happened to Dewey, a cat that was fostered with Animal Outreach.

On Animal Outreach’s Facebook page, there was an advertisement for free outdoor shelters to keep outside cats warm during the winter. The shelters, which were simply a Styrofoam cooler filled with straw, were in high demand.

One day a woman walked in and took a few shelters, then started talking to the volunteers about how she wanted to get her cats fixed. In an offhand remark, the woman mentioned one of her cats wasn’t cleaning himself and had feces stuck to his bottom. A volunteer overheard the remark, and asked if she could take the cat into the vet to be looked at.

The next day, Dewey was taken to the vet. While the veterinary technicians were cleaning him off, they discovered something tragic; Dewey had an exposed tail bone. Because of this, Dewey was taken into emergency surgery and most of his tail was amputated.

Dewey was placed on strong antibiotics and sent to live with foster mom and volunteer Sarah. After a month, Dewey had fully recovered and was taken to the adoption center in Shelbyville to go up for adoption. Within a few days, Dewey was adopted and was no longer an outside kitty, but a pampered inside feline. 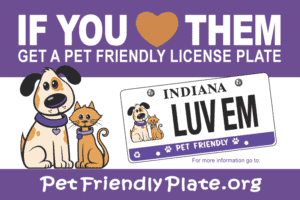